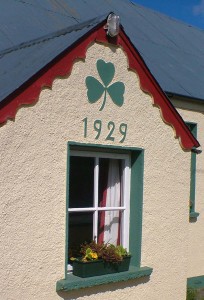 The Shamrock Hall was built in the year 1929, and to this day is still used for many community activities, including Opportunities Knocks every year, ICA, Art Classes and committee meetings for different groups and organisations in the community.

History of the Shamrock Hall
Taken from the publication ‘Kilanerin’, published c.1987

Building of Shamrock Hall, c.1927
Fr Kevin Doyle the C.C. in Ballyfad discussed with Peter O’Connor of Kilanerin, the erection of a small cabin type of building which would be used as a meeting room, dressing room, etc., as the cricket field was then the local football pitch. During the conversation it was suggested that Mr. Percival Waymas, Quinn of Borleagh Manor should be approached with the idea that he might supply the sand and gravel.

When Mr. Quinn heard of their idea he suggested why not have a proper plan drawn up and build a proper Hall. He then went to Wexford to see the County Council Engineer Mr. Flood. He told him what he required. Mr. Flood then drew up the plans. Mr. Quinn then asked Peter O’Connor to work out the amount of material and cost to meet the requirements of the plans. When this was worked out and given to Mr. Quinn, all materials exept (sand and gravel) as ordered and delivered by Staffords of Wexford and all paid for by Mr. Quinn. Work commenced and Peter O’Connor, Joe Loughlin, Mart Sullivan and Bernard O’Connor were the only workers paid for the building of the Hall. Water was carried from the pump and the concrete mixed by free labour from all ends of the Parish and sand and gravel hauled from Borleagh with horse and cart by the local farmers.