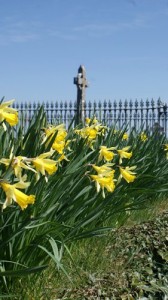 In ancient times, the areas which now comprise the parish of Kilanerin, were mainly in the old parishes of Kilcavan (Limbrick) and Kilninor, where the resident clergy had responsibility and also for ministering to those who lived in Gorey.

The parochial registers for Kilanerin go back to 1786, but the parish as an independent one dates from 1845 when Kilanerin, as well as Gorey, were established as separate parishes.

The place name of Kilanerin is non-ecclesiastical and is an Anglicised from ‘Coill an Iarainn’ – The Wood of the Iron. 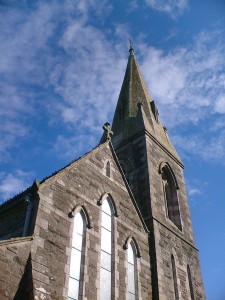 Location
Gorey was established as a separate parish from Kilanerin in 1845 and Fr. Peter Doyle was appointed Parish Priest of Kilanerin in the same year. The building of the Church began in 1863. It was to replace one which is believed to have stood in the farmyard area on the north side of the present church. Apparently there was some discussion about the siting of the new Church. An alternative site in Pallas, which would have been more central to the Parish, was proposed. The field at Pallas crossroads, now owned by John Twomey, was owned by the Parish and is still known as the priest’s field. The decision to locate the Church of Kilanerin is believed to have been influenced by the Esmonde family of Ballynastragh, who were major benefactors of the Church.

Building of the Church
The foundation stone was laid on the Feast of Sts Peter & Paul, 29 th June 1865. The architects were Pugin and Ashlin. The contract price was £1500. Gratton-Flood, in his ‘History of the Diocese of Ferns’ states that the famous Fr. Tom Burke, O.P. was the preacher at the formal blessing and opening in 1872. However, Canon Michael O’Neill was in doubt about the accuracy of this date and, as he was unable to establish a definite opening date, no centenary celebrations were held during his pastorate (1961 – 1977). Canon Peter Doyle died in 1883 and was buried inside the Church near the Sacristy door. His grave is marked by a small inscription on the floor.

The next Parish Priest, Fr. William O’Neill, was later to become Dean of the Cathedral Chapter and is still remembered and referred to as Dean O’Neill. The Church spire was completed by him, probably about 1900. It was he also who renovated the Church at Ballyfad and built the Parochial House at Kilanerin and the Curate’s House at Borleigh. The Parochial House replaced the house which is still standing in the farmyard and is used as a piggery and store. The site of the Parochial House was acquired by swopping a field of parochial land on the Borleigh road with the Somers family of Limbrick for the area now covered by the house, lawn and garden.

If local tradition is to believed, the Parochial House built before the spire was completed. The story is told that when the scaffolding was in place to lift in the final stone and the cross onto the spire, a youth of 14 years named Har Loughlin climbed the scaffolding and hung his cap on a pole 10 feet higher than the spire and so claimed the record for heights in the Parish. It is alleged that Dean O’Neill watched this episode from the hall door of his house but only intervened when the youth returned safely to the ground. The handrails by the granite steps approaching the hall door were erected as an aid to Dean O’Naill in his old age.

The Church is 100 feet long by 45 feet wide and seats almost 400 people. The nave arches are carried on red marble columns with Kilkenny limestone caps and bases. The walls are built of light blue calp stone with granite dressings. This description is carried in the Dublin Builder magazine of the time, which also said that “in the new Catholic Church at Kilanerin, the detail is extremely severe and simple, no tracery being introduced except in the chancel and side chapel and windows.” The local tradition is that the stone for the spire was cut in Newtownbarry and a firm of carters there, owned by a Mrs. O’Connor, drew the stone of Kilanerin for £25.

Stained Glass
The stained glass windows over the alter were erected in memory of the builder of the Church, Canon D oyle. The window show the Apostles, Peter and Paul, patrons of the Church, on one side and Sts Patrick and Brigid, patrons of Ireland, on the other. The centre window depicts the Sacred Heart being worshipped by Lady Erin, which probably reflects the upsurge in devoation to the Sacred Heart towards the end of the nineteenth century and the consecration of Ireland to the Sacred Heart in 1873. At the west end of the Church is a very fine stained glass window of Calvary with St. John and the Mother of Jesus standing by. An inscription on this window reads: “Erected to the memory of Thomas and Catherine Woodburn, Annagh”. The Woodburns lived where Annaghcross Post Office is now. Local tradition carries a story that this window was a gift of one of the Woodburn family who discovered a gold mine in Rhodesia where he encountered Cecil Rhodes. High in the apex of the west end is a small plain blue window which catches the eye of the priest as he “raises his eyes to heaven” during the Consecration of the Mass as it is now said facing the people. Many visitors remark on this simple feature through which streams a pencil of ‘heavenly’ light. The windows in the side-aisles are much later. They are believed to have been the gift of Colonel Quinn of Borleigh in the thanks to God for the recovery to health of his daughter. They were installed during the pastorate of Canon Kehoe.

The Mrs Harold Barry listed above is the Margaret Eliza Barry, sister of Sir. Thomas Esmonde, who died in 1878 and whose grave is marked by a large monument in the Church grounds. The prominence of the Esmonde family among the benefactors is reflected in the fact that a special pew at the front of the right aisle was reserved for the Esmonde family and is still used by them today.

Baptismal Font
The Baptismal font carries the Inscription “Pray for the donor John McDonald”. It is believed locally that John McDonald was a publican in Dublin who hailed fron the Ballyconlore farm known as Errity’s.

Confesionals
The donor of the Confesionals was James Jones of Pallas, a granduncle of Fr. Aidan Jones, C.C., Riverchapel. The ornate pitch pine pulpit, now moved to one side and no longer in use, was given by the Parishioners of Kilanerin and Ballyfad in 1916 to commemorate the Golden Jubilee of Dean O’Neill.

Statues
The Statue of St. Anthony was presented by Mr and Mrs Kealy who were for many years teachers at Kilanerin School.

Past Priests
When Dean O’Neill ied in 1926, two Parish Priests had served for a total of 81 years. The next 60 years were to see seven Parish Priest s in Kilanerin, three of them in as many years. Dean O’Neills successor, Fr. Aidan McCormack, a native of Ballymitty, died in 1929. He was succeeded by Fr. Denis Murphy who transferred to Bunclody in 1936. The next Parish Priest, Fr. Owens Kehoe, who had been a curate in Admastown, served for 25 years until 1961. His successor, Fr. Michael O’Neill a native of Rathnure, came from Wexford town and served until his death in 1977. Fr. Richard Kavanagh, a naïve of Adkamore but whose father came from Croghan, became Parish Priest in 1977 after serving as a curate in Gorey. He died suddenly in April 1985 as he was returning from a golf game. His successor is the writer of this article.

Renovations of the Church 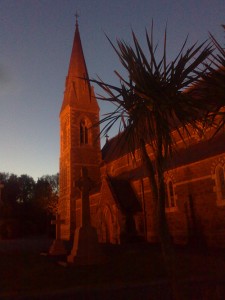 It was Fr. Michael O’Neill who was responsible for major renovations of the Church and grounds during his pastorate. The grounds were cleared of much overgrown shrubbery, given a damp-proof plaster, an oil-fired central heating system was installed, the Baptismal Font was transferred to the right hand side of the main entrance – popularly known until then as ‘puppies corner’, and the old baptistery on the left hand side was converted into a mortuary chapel. The gates of the Mortuary were donated in memory of Canon Kehoe. The Mosaic in the new Baptistery was the gift of Mr. Edward Smith, the architect who advised on the renovations.

In 1970 the Sanctuary was re-arranged in accordance with liturgical guidelines of the Second Vatican Council and in June of the same year, Fr. O’Neill’s nephew, Dermot, was ordained priest in the newly renovated Church – probably the only ordination ever in Kilanerin. The original alter carrying the tabernacle was free-standing in the semi-octagonal sanctuary area. It was backed by highly decorative reredos. In the reconstruction the reredos was demolished and the alter moved forward. The tabernacle was resisted on what had been the Blessed Virgin’s alter and the Statue of Our Lady transferred o what had been St. Joseph’s alter, thus creating the slightly anomalous situation of the stained glass window of Our Lady overlooking the tabernacle and the St. Joseph window backing the new Blessed Virgin’s alter.